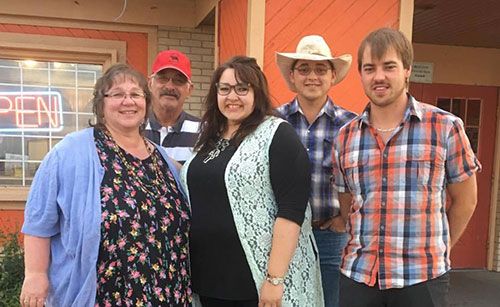 From the rolling hills of Switzerland near the Alps to the grand grasslands of Nebraska’s Sandhills, one young man has hopped several time zones to keep it rural in the Good Life. From June - September, Christof Badertscher, 24, of Oberthal, Switzerland is staying with three host families in Nebraska through IFYE.

Founded in 1948 on the premise of creating peace through understanding, today IFYE is a rural-based, full cultural immersion program for young adults. IFYE enables young adults that are 19 and older from more than 25 participating countries around the globe to live with host families primarily in rural areas and gain a new appreciation for the world’s diverse cultures while experiencing the meaning of global citizenship.

For Badertscher, this opportunity put Nebraska on his radar.

“I was not familiar with Nebraska.  I had heard of popular US cities and national parks before,” Badertscher said.  But after finding out I was going to Nebraska, I was excited to get the chance to come here and experience it all – especially the Great Plains.”

And his first impression has been a good one.

“Nebraska is amazing. All the people I have met so far have been so welcoming and make me feel at home easily. I become part of the families really fast,” Badertscher said.

Bart and Kathy Dye of rural Alliance hosted Badertscher for the first month of his IFYE adventure. The Dyes shared their life with him, including Badertscher in the daily activities on the farm such as checking cattle on pasture, starting pivots, and preparing meals. His stay in Alliance also involved experiencing wheat harvest, raking alfalfa, and moving hay bales.

Badertscher said he completed an apprenticeship as a refrigeration technician before coming to the US and will begin studying engineering at the University of Lucerne upon his return home in September. While he grew up in a rural community, he has had experience with dairy cattle at home.  All of these experiences on a western Nebraska farm and ranch were new to Badertscher.

"I am interested in learning about different crops and livestock. I have learned so much in my first month in Nebraska and am excited to continue with my next families in Bertrand and Overton,” Badertscher said.

Working hard and playing hard, the Dyes’ squeezed in quick trips to Crawford to experience the Crawford Livestock Market, Toadstool Park, and the Post Playhouse as well as a daytrip to the Black Hills.  They also celebrated Independence Day with friends, watching the fireworks show in Alliance.

Along with being “Nebraska Nice,” Badertscher said he really enjoys Nebraskans’ sense of humor as he experienced Carhenge and the Car Art Reserve and the Rest Area north of Alliance.

Alyssa Dye, who was selected to represent Nebraska and the United States in this unique program in 2016, said her experience with IFYE gave her the opportunity to experience life in Estonia and India as a local for six months.

Dye said, “The opportunity through the IFYE program is incredible.  Getting to live with rural families in these countries really granted me a ‘boots on the ground’ experience. Right from the start, I jumped in as part of the family, learning the languages, experiencing the different cultures as a local rather than through a tourist lens. Now, I think my experience has come full circle as a host sister, proudly sharing my home and life in Nebraska.”

Badertscher is the second young adult from Switzerland that the Dyes’ have hosted through IFYE. While Alyssa was in India last fall through this same organization, the Dyes’ hosted Swiss IFYE Regina Nussbaumer.

“My family continues to grow through this unique organization. IFYE offers so many opportunities for young adults to experience life around the globe and for families to share their lives and stories,” Dye said. “They gain new family and learn about a different culture in a personal way.”

This year, Nebraska sent one young woman to Austria and Costa Rica for six months through this organization.  Along with Badertscher, a young woman from Germany is also staying in Nebraska for three months.

Dye said Nebraska IFYE is looking for families interested in hosting young adults in the future.