We believe our collective experiences as IFYEs, host families and friends make us family who care about each other
and give us an appreciation of the world-wide definitions of family

The IFYE program is a platform where we find some genuine people from different races, religions, languages, and cultures who turn into a family and friends for a lifetime. 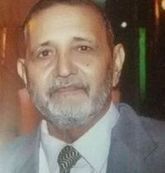 About my Grandfather
In 1966, an introverted but well-educated farming youth from the village of Barara in Agra, India visited the USA as an IFYE delegate. He was Mr. Ramesh Chandra. He stayed in Charles City, VA with Marion and Adolph Hula and in Texas with Mr. Pete and Zhelma Rogers. He also spent some time in Kern County, Oildale, CA with Mr. Admond L Rogers and family.

An Indian country youth was awestricken by the US in 1966.

His visit was a memorable one for my grandfather. 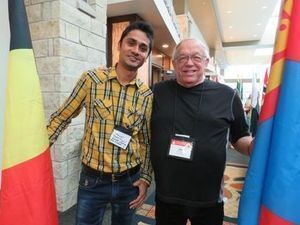 About Me
My grandfather told me about the IFYE program as a life-changing and honorable experience. He was so proud to be an IFYE and so was I.

I had the golden chance to be an IFYE and visit the USA in 2016. It was a coincidence or a destiny, but God sent me to the same country and to the same people where my Grandfather Lt. Mr. Ramesh Chandra had been to. He was 24 years old in 1966 and I was the same in 2016 (50 years later!0)

My official host family states were Kansas (June to September) and Virginia (September to December). It was my first international trip outside India, just like my grandfather's.

For me, the IFYE program is amazingly awesome. It gives me a new identity in life. It has given me a chance to experience a new country and culture, and importantly, has allowed me to connect to the people I met during my entire stay in the USA. People were so welcoming and I had a chance to spend my daily life just like a family member of my host families.

I went out for farm work purposes, helping my host families with daily chores, exploring the neighboring areas, and meeting new people every day. I have visited multiple churches in different counties and states with my host families -  all were very positive experiences. Also, I have been to community colleges in Kansas and schools in Virginia to interact with young students and share about the colorful and vibrant life of India. (as textbooks were outdated). I have stayed with the same Hula family in Charles City, VA where my grandfather stayed in 1966.

I will always be thankful to my friend, Alan Lambert, National USA IFYE Program Director,  who I first met in 2015 at the Asian Studies on the Pacific Coast (ASPAC) Conference in Chandigarh, India. Alan helped me to become an IFYE and briefed me step by step about this exchange program. Thanks to Barbara Spangler (VA State Contact/Coordinator) for hosting me at her house in Arlington, VA.

Again, the IFYE program is a platform where we find genuine people from different races, religions, languages, and cultures who turn into a family and friends for a lifetime. 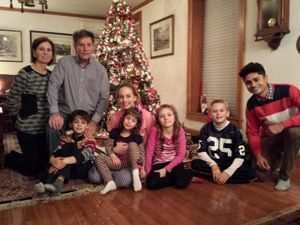 Mohit spending Thanksgiving with the Stairs family in 2016

Bringing the IFYE Family full circle
Jess Stairs (back left in photo) was an IFYE from Pennsylvania to India in 1964, two years before Mohit’s grandfather was an IFYE from India to the United States. The Chandras were one of Jess’ families.

Jess says that the Chandras were very friendly, very modern, and their farm was a showcase for visiting dignitaries. Perhaps the time that Jess and the Chandras spent together was the catalyst for Ramesh Chandra, son of the family, to become an IFYE in 1966? When Ramesh Chandra was in the U.S. as an IFYE, Jess and he were able to spend time with each other again.

Unfortunately, as time went by, Jess lost contact with the Chandra family. But when he attended the Asia Pacific Conference in India in 2015, he was able to connect again with Mr. Lt. Ramesh Chandra, grandfather of Mohit Singh. When Mohit was an IFYE to the United States in 2016, he was able to spend Thanksgiving with Jess’ family – bringing the IFYE Family full circle (front right in photo).