We believe the IFYE experience provides the participant with leadership development opportunities
which will enhance his/her capacity to have a major positive impact
as a citizen of the USA and the world.

Tom and Jo Ann (Smith) Trail’s IFYE experiences started in Idaho and Virginia where they were involved in 4-H, went to National 4-H Club Congress, and became interested in learning more about different cultures and how people lived and worked.

Both were IFYEs in 1956 – Tom (Idaho to Nepal) and Jo Ann (Virginia to Sweden). After their return, they met at an IFYE conference and married in 1959. Their daughter, Ruth, became an IFYE in 1982. Following are some of their experiences in leadership development “as a citizen of the USA and the world.”

The photo on the right is one of Tom's host fathers. As a "Gurkha" the stipend paid him by the British government allowed him to send his children to college.

Training and long-term international work
Due to their IFYE experiences, Tom and Jo Ann attended Montana State University (MSU) as scholars at the International Cooperation Center. This program, including intensive Spanish training, prepared them to work and teach overseas.

Ruth in first grade in Chile – Although left-handed, she is shown using her right hand in school.

Their first trip after MSU was to Patzcuaro, Michoacán, Mexico, where they worked with local Extension personnel. Here Jo Ann used her Spanish and learned to bargain at markets, skills she still uses.

The Trail family (all 5) spent several years in South America while Tom worked:

Back to the USA
The family moved to Pullman, Washington in 1971 where Tom was the Staff Development Specialist for the Extension Service. He also became Chairman of the Masters of Continuing Education which had older students. One of his doctoral students from India, Carolyn James, established a vocational school for lower caste women in southern India.

In 1972, they moved to Moscow, Idaho, purchasing Tom’s parents’ home where they still live. The Mountain View 4-H Club, established by the Trails (with Tom’s brother and wife), is still active. All seven Trail children were club members, won trips to 4-H Club Congress and five won national scholarships.

Tom also did short-term consulting with USAID in Malawi, Sudan, Lesotho, Swaziland, other African countries, Central Asia, and South America in the 1980s and 1990s. He worked on five continents over his 40 years with Extension, including his sabbatical.

Hosting
In the 1980s, the Trails hosted two IFYEs from Denmark and the Netherlands as well as an American Field Service Exchange student from Belgium, Dirk Dansercoer. Dirk became a world-renowned Polar Explorer. In 1983-84, they hosted a Chinese teacher who taught English at Moscow High School.

Jo Ann and Tom were the host family to Isle of Man scholars who attended classes for a year at the University of Idaho (U of I) in the 2010s through the Ella Olesen Scholarship. Each year, Ruth met them when they flew into Seattle, showing them the city, before they flew to Moscow. 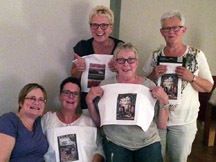 Ruth (left) and her four Van Der Stouwe host sisters on a return visit to the Netherlands in 2016. She has visited her host country at least 15 times and hopes to visit again in 2023.

Ruth – IFYE to the Netherlands and her current career

In Summary
It has been a fruitful marriage of almost 62 years, traveling the world, developing leaders, and becoming citizens of the world. 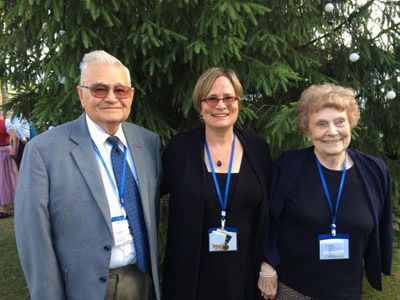 At 2016, European IFYE Conference in Estonia, Tom and Jo Ann received an award for their 60th IFYE anniversary.