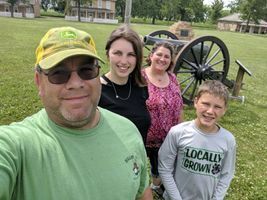 Incoming IFYE, Kelly Wakeman from the United Kingdom arrived on June 17, 2019 in South Dakota.  Kelly, age 24, comes to us from Devon County, England, where she lives and works on her family’s 800 acre livestock and crop farm.

Kelly has spent the past three weeks near Colton, SD living and working with the Mark and Heidi Zwinger family.  Heidi is the manager of Boadwine Dairy, a large-scale multi-site farm that milks over 2300 cows.  Kelly has been able to observe and participate in the everyday workings of the Dairy, as well as participate in the everyday lives of the Zwinger’s.  “Everything is much more large-scale here,” said Kelly, “The farms, houses, machinery, everything is bigger.”

Kelly was able to participate in giving tours of the Boadwine operation to schools and other groups.  “The kids couldn’t understand her British accent,” laughed Heidi.

Kelly also enjoyed being part of a genetics showcase sponsored by Alta. People from 21 countries traveled to various dairies throughout the Upper Midwest, and stopped at Boadwine as part of the showcase.  Kelly was able to travel with this group to other farms which really gave her a taste for the variety of dairy operations.

The Zwinger’s took Kelly to visit the QUAL robotic dairy near Lisbon, ND, the Deer Creek Alpaca farm near White, SD, the Dignity statue near Chamberlain, the Atka Lakota Museum, Al’s Oasis, and the Corn Palace.  “I’ve seen and learned so much!” said Kelly.

Heidi Zwinger also expressed how much she has enjoyed hosting Kelly, "It's a great way to learn about another country, without leaving home."

Kelly participated in IFYE orientation in Washington, DC, before coming to SD.  She said how much she appreciated meeting the other inbound IFYEs to the USA and that she has enjoyed staying in touch with them these past weeks through social media.

Kelly has enjoyed the American food.  “Mark makes great burgers!”  She has been surprised by the lack of gun regulation in SD, and by the lack of opportunity to do more recycling in rural SD.

Kelly is  a member of Kingsbridge Young Farmers which is small club within the Devon Federation of Young Farmers that is part of a rural youth organization in the United Kingdom.  She lives on her family’s mixed farm which consists of dairy, beef, sheep and arable in ‘sunny’ south Devon. From milking the cows to lambing, she really enjoys helping out at home. Kelly has two brothers.  One of her hobbies is horse riding.  Kelly also works as an accountant, her “day job”.Kelly said, "I wish to share my knowledge of British agriculture and listen and learn about the American way of farming, and it will be interesting to compare especially with the impending Brexit changes.”

Kelly has just left the Zwinger’s to participate in a job shadowing program through Syngenta in Minnesota for the next month.  She will learn about the ag industry though Syngenta while also staying with various host families.  Kelly will then return to South Dakota on July 28 and live with the Jim and Kim Petik family near Keldron, SD for three weeks, and then on to live with the John and Beth Simonsen family near Highmore for about three weeks. Kelly also hopes to be able to see the SD State Fair.

Kelly returns to the UK on September 3.