Taiwan is located in between the southeastern coast of the Asian continent and the East Asian islands along the western Pacific Rim. The neighboring countries include: Japan and the Ryukyu Islands to the north, Philippines to the south, and Mainland China to the west. The Republic of China is slightly larger than the combined areas of Massachusetts and Connecticut.

The shape of Taiwan is a long and narrow island, like a sweet potato. Due to the narrow plains and the longitudinal valley along the east coast, 70% of the country’s 23.4 million people are concentrated in the six western metropolitan areas: (Taipei, New Taipei, Taoyuan, Taichung, Tainan, and Kaohsiung). It is the 17th most densely populated country in the world with a population density of 650 inhabitants per square kilometer.

The country’s ecological resources are abundant since Taiwan belongs to both tropical and subtropical climate zones that range from rainy to dry weather and hot to cool temperatures.

In addition, Taiwan has become one of the world's top producers of computer technology.

Of Taiwan’s 23.4 million people, aborigines who have inhabited the island for around 8,000 years make up 2.3% of the total population. The Han Chinese who migrated to Taiwan in the seventeenth century make up the rest of the population. 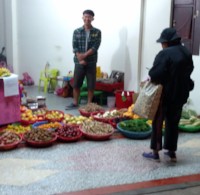 Taiwan is very popular with travelers for its night-markets which are filled with many stands that sell cheap and delicious food. Additionally, some night-market stands display traditional and cultural arts

IFYEs will arrive in Taipei spending one to two days touring around Taipei City and visiting the National 4-H Club Association of R.O.C.  Participants will then travel on by public transportation or car to be hosted by 3-4 rural-based families throughout the country.

IFYEs will participate in agriculture as well as being involved with Taiwan 4-H Club activities which could include: 4-H Leadership Camp, 4-H Paddy Eco-camp, and town 4-H clubs who hold summer training camps and projects. They will experience night-markets, Taiwanese food, using chopsticks, and many other activities of family life and community life in this country.

Politeness, as well as honor and respect for elders, are of important in this culture. In addition, one of the famous characteristics of the Taiwanese is hospitality - making visitors to the country feel welcome.

An IFYE at Work and Play

Education, Dining and Agriculture in Taiwan