Devon is a county in southwestern England reaching from the Bristol Channel in the north to the English Channel in the south. It is located about 2.5 hours from London.

About 25% of the county is heath or moorland providing rough grazing mainly on Exmoor and Dartmoor. Dairy cattle are most important in eastern, northwestern, and southern Devon, and Devonshire clotted cream is still produced. Beef cattle are raised throughout, especially in the south and west. Except for eastern Devon, sheep are important throughout the county.

As well as agriculture, much of the economy of Devon is linked with tourism. Devon is one of Britain's most popular summer holiday areas. Tourism dominates the coastal areas and is also significant in the rural interior. The main resorts, apart from Ilfracombe on the north coast, lie on the south coast and include Torbay, Paignton, and Brixham. Both coasts abound with picturesque small towns and villages, such as Salcombe, Lynmouth, and Clovelly. Service trades employ two-thirds of the working population reflecting the importance of tourism and the large retired population that is attracted by the mild winter climate and scenery.

Fishing is still important, especially at Brixham and Plymouth, which also has a naval base. Kaolin (china clay) from Dartmoor and ball clay from the Bovey basin are the chief mineral exports. Local county industries include: textiles, dairy produce, glass, woolens, lace, and the complex industries of the Devonport dockyard. Plymouth and Exeter are the main industrial centers. 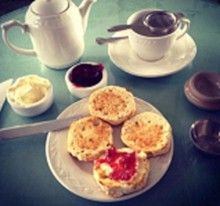 Katie (2015 IFYE) mentions, “If you enjoy drinking tea, England is the place for you! England is famous for their “High Teas” complete with scones, clotted cream, and jam.  England, birthplace of Shakespeare and The Beatles, is a country in the British Isles bordering Scotland on the north and Wales on the east. The capital, London, on the River Thames, is home of Parliament, Big Ben, and the 11th century Tower of London.

“While in England, I stayed with host families in the towns of South Molton and Tavistock (Devon County, England). During my time there, I was hosted by a family who owned a dairy farm and made their own ice cream. It was interesting to watch how they make a living starting from milking their own cows to the end product of packaging ice cream.

“During my stay, I also helped my host brothers with farm chores, picked wild berries, and attended several social “Young Farmers’” events.” (One social event was a huge foam party dance; another was a late summer ball to raise money for the Exeter Leukemia Fund.)

“There is much to explore in this great country,” Katie concludes.